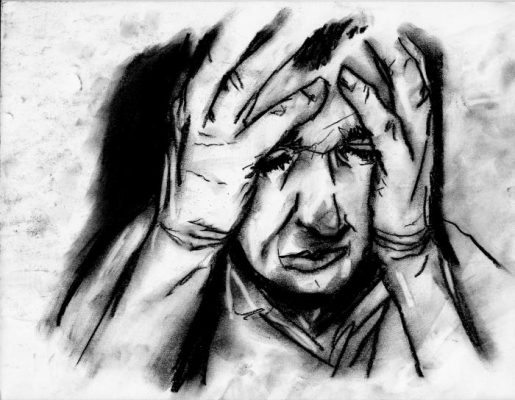 The Fire – By Ryan Sirois

Four years ago I swallowed my last pain pill. Christmas night. After days of trying to look past the glowing orange pharmaceutical bottle on the kitchen counter. At Chris’s parent’s home in Pennsylvania. My mind a mess. Months of heavy anti-psychotics, antidepressants, anti-anxiety medication.

A pill to focus.

To make me happy.

And one more to sleep at night.

Six months out of rehab, diagnosed by a psychiatrist as anxious, depressed, obsessive-compulsive, ADD.

A new pharmaceutical regime to replace the old.

I became a washboard of blank stares and quilted thought. Words dangled from the corner of my mouth.

It was my second Christmas with Chris’s family. We were in the cordial stage of getting to know each other. That awkward period where every sentence is dissected to make sure you don’t come across like an idiot. Not wanting to let too much silence fill the room or monopolize any conversation. Waiting for the right moment to interject a warm joke, the appropriate laugh. I tread water to keep my head afloat, any lengthy discussion passed over me. My mind melted with the snow.

By the third or fourth family Christmas party my threshold had diminished. The twitch in my brain became an itch in my body. Every inch of my skin tingled with nerves.

Alone, Chris and I went back to the house.

Ice crackled against the driveway as the car crept up. Headlights traced the ground then spread wings against the garage door. A finite horizon aglow. Until Chris turned the car off.

The heat of my breath exhaled puffs of cotton against the bitter chill.

We scurried toward the front door.

Vibration, static through every cell. The orange bottle in the kitchen, in the corner of my eye. I have become immune to the civil war in my head, the traffic of thought, of fear, emotion, of right and wrong. It is all just static. One continuous dull hum of mental silly putty, impressions of life and feeling that stretch and dissolve into a fleshy wad of nothing.

Chris runs upstairs to the bathroom.

I quickly walk into the kitchen.

No. Something soft somewhere. But it flatlines. Dissolves into putty.

Mechanically my arm extends. Percocet. Twist open the bottle. Pop one out. Get greedy. Pop another out. Put it back. My heart on fire, it pounds in my throat at rapid speed. Adrenaline. Everything feels off.

I hear the toilet flush upstairs.

One pill enters my mouth.

I fumble to put the lid back on. My body tingles.

As I put the bottle back onto the counter, a voice says, “What are you doing?”

I turn to see Chris standing behind me.

His voice almost unrecognizable. I had never heard that tone, that kind of anger. Or hurt. Or fear. Or whatever it was. I had never heard it. Something deep, deep down; a werewolf who comes out only when the rage is so pure, the betrayal so painful.

The next seconds. Minutes. Days. They were all painful. The coming months were painful. Every time our eyes met, it was painful.

His parents walked in the house. I retreated upstairs. Chris stayed with them. Venomous.

It was as if my eyes could suddenly see for the first time. My ears open. There was an earthquake below and I did not know how to face it. If I could have hid in a closet, I would have. The energy was suffocating. The guilt overwhelming.

I call my sponsor, fingers trembling while I pull up his phone number. He tells me to breathe. To calm down.

It’s over, I tell him. It’s fucking over. Chris wants me to find a flight and leave. He’s done with me. I fucked up.

“Ryan, we do things differently now. When we fuck up we correct it. You fucked up. You need to go downstairs and apologize to Chris and his parents. Right now.”

I tell him I can’t do that. What if he didn’t tell his parents. I’ll look like a drug addict.

“I can’t help you if you can’t do the work. You said when we met that you were willing to do whatever it takes to stay sober. Ryan, you need to go downstairs and own up to it. Apologize. Chris is angry now, his parents may be angry. But you can only do your part. Keep your side of the street clean.”

Chris swings open the door. His face has changed. It is cold. He wont look at me.

“Have you booked your ticket? I want you out of here.” The rage. It is a fire poker ready to pierce my heart.

“Is that Chris,” My sponsor asks through the phone. “Ask him if he will talk to me. I can try and explain things.”

He won’t speak to him.

I tell him I will.

“Call me immediately after.”
I tell him I will.

An image of elementary school. A giant circular, primary colored fabric. Parachute material. Everyone gathered around, holding the edges. We shake it rapidly, like dusting debris from a rug. Screams, laughter. The teacher instructs me and a few kids to let go and run underneath the blooming, billowing fabric.

My tiny fingers let go. Intently I run under, directly center. Colored shadow reflects on the grass below as sunlight hits the fabric above. I lay down to face the movement overhead. The sound of fabric repeatedly beating against the wind is deafening. It drowns all other noise. The laughter. The birds. It is a monotonous drone that envelops. Pulsating rhythmically. I stare up. It is like the world is crashing down on me. The weight of everything pounces and swallows my body.

That is how I feel now.

A little boy with the weight of the world ready to devour him.

As I walk the endless hallway toward the stairs. The long decent.

I stop midway and shake my head. I can’t do this. There is no way. Tell these people who I hold on the highest of pedestals. The parents of my boyfriend whom I want so desperately to like me. To accept me. To laugh at my stupid jokes. To think I am the best thing that has happened to their son. I have to tell them I stole their pain pill and relapsed in their home on Christmas.

Voices from downstairs danced like mice against the walls. Faint whispers of sound. Or maybe I was floating somewhere else.

And somehow I fought through quicksand, one creaking wooden step after the other. All color had left my face. Or a vampire drained the life from my neck. I was pale, trembling.

Banter from in the kitchen. A laugh.

She looks surprised to see me standing there.

I look for any sign of disgust. Disappointment. Hatred.

The words roll out. “Can I talk to you?”

His father walks in.

I can barely speak.

“I need to talk to you about what happened.”
“What do you mean? With what?”
A moment of disbelief. I’m not sure what to do. Chris said he was going to tell his parents. He had to explain the missing pill and why I was leaving.

“Before. What happened before,” I stammer.

This was becoming more awkward.

They have to know.

His mother and father look at each other. His father shakes his head.

Chris walks in the room.

He is wearing a dark blue sweater with a checkered collar shirt underneath. His arms folded across his chest. Eyes blank.

They want me to say it. To confess. This is torture.

I say it’s about taking the pain pill off the counter.

They had no idea. Chris never told them.

Word vomit. It all came out.

His father’s face warmed with concern and assurance. “It’s fine. You can have whatever you want here. You don’t have to ask.”

I watched it settle into his mother’s eyes. She understood, quickly explaining it to his father. She came over and hugged me. Their only worry was me. If I was alright. Then I’m sure, it turned to Chris.

I apologize repeatedly before retreating back to the room to hide.

This is not what I expected.

Chris walks in the room to say we are going for a ride.

I grab my coat and rush out after him.

The headlights retract their wings from the finite horizon and trace back as Chris pulls the car out from the driveway. The crackling of ice beneath tires is now an unsettling sound that crawls down my spine.

Before the silence eats my stomach I begin to tell Chris how sorry I am.

So I guess I talk first.

And the floodgates open.

I don’t know how to make it right. What to say. How to act. I feel in my gut that we are over. He has had enough of my shit. Enough of my lying. Of the secrets. The darkness. My darkness. He wore a heart monitor just before I went to rehab because of palpitations from anxiety. Chris had walked into a haunted house that was my life. Full of demons, ghosts and skeletons.

His heat could melt the snow outside. “I told you when you were in treatment that this was the last time. I will not enable this. I don’t deserve this. You promised me never again. And we agreed. You agreed. That if you relapsed, it would be over. And you did it, Ryan. You broke your word. You broke your promise. I can’t trust you.”

Words. Pleas. They swarm the rental car like gnats.

This person who stood by me. Who supported me. I was breaking him.

And he knew it.

Chris drove for over an hour. Through black roads in Lancaster, Pennsylvania. Surrounded by midnight trees and Amish farmland. Two headlights cut through the bitter cold night. Two desperate souls ready to crash.

He made me call my parents and tell them I relapsed.

My mother is supportive. You will get through this she tells me. You’ve only been out of treatment a few months she reminds me.

I wish it were that easy.

That there was a switch. The insanity miraculously stops. The obsession goes away. The insatiable itch to fill a void with something, anything, just evaporates. But it’s one failure after another. One guy after another. Emotional and physical investments for a spiritual hiatus. There was Sean, Frank, Joe, Amber, Lauren. One person after the other. The twin. The hope. The seeking and searching for whatever it takes to feel whole. Complete.

Running round the May pole with no end to my ribbon.

Dizzy, fighting an onset of nausea.

The parachute of fabric crashing down on my head.

It’s the fragments. The layers upon layers of destruction, construction. Building and rebuilding. The pieces of those experiences, the people an their story, who laid the bricks of my path. My past.
Fast forward four years.

Chris and I are on our honeymoon. We’re in Athens. The tour bus driver tells us to look to the right. She says part of the ancient city still rises from modern Athens. Over centuries society builds new civilizations atop the old, forming what is called a tell. An archaeological mound of ruins, layer upon layer of ancient culture buried beneath what we see today. And if you dig enough, artifacts and history can be unearthed.

I’ve been sober for four years.