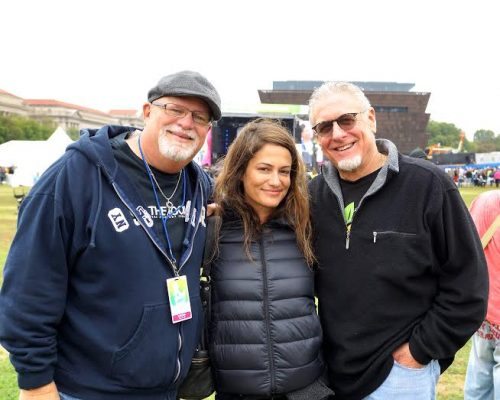 When you’re gathering with thousands of sober folks, relatives of addicts and others who just care about the recovery cause, you don’t know what to expect.

Or let me rephrase: I had no idea at all what to expect.

I am not, by any means, a political activist. It’s safe to say I have never gathered with any large group of people except at concerts. And I couldn’t seem to find out a great deal of information about the event ahead of time. The first time someone asked me if I was going a few months ago, in fact, I said something along the lines of, “Look, I don’t gather.”

But then the information seeping out about the event seemed to snowball: Director of National Drug Control Policy Michael Botticelli would be speaking! Sheryl Crow and Steven Tyler were performing! Comedians Tig Notaro and Bill Burr were putting on a comedy benefit the night before. And oh yeah, I care about the cause.

And so I got myself to DC.

The night before all the action, the who’s who of sober bloggers (no, this is not an oxymoron) gathered at a restaurant called the Argonaut to listen to the music stylings of DJFM of Rave Clean and match Twitter photos to full size bodies. This wasn’t as creepy as it sounds and I got the chance to hang out with all the folks who made our National Recovery Month celebration, #APM30Days, such a success, including Chris Aguirre from Klen + Sobr and the Since Right Now podcast, Magz Shores from Sober Courage, Holly Whitaker from Hip Sobriety, Nancy Carr from Last Call, Laura McKowen from I Fly at Night, Laura Silverman from The Sobriety Collective, Sober Senorita Kelly Fitzgerald andVeronica Valli, among others. Also making the rounds (but not buying any) were authors Jason Smith and Sacha Scoblic. In between proclaiming, “Oh my God, you look just like your picture!” and eating skewers and fried cheese (by all means don’t knock this until you’ve tried it), we talked about podcasts because, well, we all have them.

Then, on Sunday at about 2 pm, tens of thousands of us gathered at the National Mall. The goal of the event was to get lawmakers to create policies that would lead to better treatment, an agenda that was pushed even more when citizen advocates met with members of Congress on Monday. The lineup for the event was quite impressive: in addition to Director of National Drug Control Policy Michael Botticelli, Dr. Oz, Patrick Kennedy, Christopher Kennedy Lawford, William Cope Myers, Pat O’Brien and the US Surgeon General took the stage. It wasn’t a short show (full disclosure: I left at 7 pm and Tyler hadn’t even gone on stage yet) but most of the crowd was so enthusiastic that they didn’t seem to mind. As Sheryl Crow said during her performance, “You guys are troopers.”Across town I caught up with Fix founder (and my old work colleague) Joe Schrank and his girlfriend, TV journalist and recovery advocate Laurie Dhue at the Greg Giraldo comedy show benefit. AfterPartyPod guestJesse Joyce MC’d while Tom Papa, Bill Burr and Tig Notaro, among others, performed (though I hate to even write this word, Notaro’s bit about diarrhea stole the night).

Crow has no idea. I finally met Nicola O’Hanlon, the Editor of the newly launched I Love Recovery Cafe (as well as AfterParty’s first writer!), who came all the way from Ireland. Just when I was getting over that surprise, I ran into a lovely girl I’d met from one of Dawn Nickels’ epic She Recovers retreats. Point is: we came in from anywhere and everywhere.

The Seigels were clearly not the only ones there to try to prevent what happened in their family from happening to others. You could argue that this is why all of us were there. You could also say that Unite to Face Addiction forever changed the face of addiction.The entire event was masterminded by The Anonymous People director Greg Williams, who made his way around the event humbly, looking more like a college kid who’d wandered into the VIP tent than the guy who’d made it all happen. Also making their way around the VIP tent: Previous AfterPartyPod guests Mackenzie Phillips, Jason Wahler, Patty Powers andTommy Rosen (who also gave a moving speech from the stage), Jamison Monroe from Newport Academy, Ron Tannebaum and Kenny Pomerance from In The Rooms and Jackie and David Seigel (you know them from theQueen of Versailles documentary). The Seigels lost their daughter Victoria in June when she OD’d at the age of 18 and are now determined to make sure she didn’t die in vain; not only did they donate $100,000 to the Unite to Face Addiction event but they are now on a mission to put whatever finances are necessary toward getting Naloxone and drug testing in every school in America.