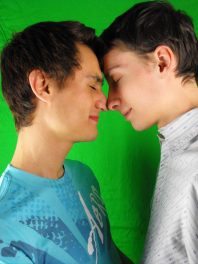 “[People] cannot choose to be either gay or straight.”

[People] cannot choose to be either gay or straight. For most people, sexual orientation emerges in early adolescence without any prior sexual experience. Although we can choose whether to act on our feelings, psychologists do not consider sexual orientation to be a conscious choice that can be voluntarily changed.

Unfortunately, there are a few misguided and/or unethical therapists out there who practice “gay conversion therapy,” despite the fact that it doesn’t work. Often, they do this in the guise of sex addiction treatment – even though they are not properly trained or certified as sex addiction therapists.

“At the end of the day, sexual addiction is not in any way defined by who or what it is that turns a person on.”

In addition to being a waste of time and money, this type of therapy can be quite harmful to the client. For the most part this damage is caused by the therapist’s inherent reinforcement of societal prejudices against nontraditional sexual desires and behaviors. One study looking at the effects of this type of rejection on gay and lesbian youth found that kids subjected to it are three times as likely to use illicit drugs, six times as likely to report high levels of depression, and eight times as likely to attempt suicide. Recognizing these dangers, two states, California and New Jersey, have passed laws outlawing the practice of gay conversion therapy on minors, and virtually every major medical and psychotherapeutic professional organization has issued a statement condemning it.

At the end of the day, sexual addiction is not in any way defined by who or what it is that turns a person on. For an analogy, consider alcoholism, where the type of alcohol consumed is not a factor in diagnosis. Instead, as with all addictions, we look for obsession, loss of control, and consequences.