Winnie The Pooh: An Introduction to Addiction – By Kyczy Hawk

Please don’t pelt me with “haycorns”. I have revisited the stories of Winnie the Pooh with a new point of view. I have been looking at the early stories from the books “Winnie the Pooh” and “

Now We Are Six” by A.A. Milne with a fresh (recovery oriented) eye.

We all struggle with what we like best; well most of us. Winnie the Pooh (or Edward Bear as he was originally known) has been clear from the start. He loves honey. He loves honey in the morning for breakfast and then, when it is not yet time for lunch – it is time for “elevenses”; that little snack before a meal. And honey is the basis of all his meals.

I too, abandoned the idea that drinking was for the evening time, even letting go of the phrase “it must be 12 o’clock somewhere” as I really didn’t care. Shame and propriety had long left me, and I drank whenever I could, and used whatever was handy. There were times when night blended into day and there was no break between getting and being loaded. It was always “time for a little something”.

In one of the early stories we get a full picture of Pooh and his delight in honey. He visits Rabbit at just the right time for a bit of something. Rabbit offers Pooh both honey or condensed milk with his bread, and Pooh, addict that he is, says BOTH. Then (rather than appear greedy) has them straight up – without the bread.

Toward the end of my drinking and using “career” I, too, did away with the bread; bread in the form of meals, in the form of ice, in the form of mixer and often in the form of a glass. I just took it straight. Yes, in public, among people who didn’t drink or use like I did, I would pretend to have some modesty, some form of restraint. But then, like Pooh, I would overdo it.

What happens to Pooh? He eats and eats and eats until there is no honey left. In fact when Rabbit wants to “quit” to take off and go elsewhere, Pooh pines for more and is disappointed when there is none left. He has eaten so much that he can no longer fit through the door to Rabbit’s burrow. In the course of the story the whole forest has to come together to push and pull the stout bear out of the hole. Even though it has taken the whole group of friends to free him, he feels no remorse or impact from over doing. In fact he heads off humming while the rest just stare after him. The first embodied children’s story co-dependent, Christopher Robin, just gazes after him saying “Silly old bear!”

Others suffered consequences in my using and drinking life. I delayed people from going about their business; my 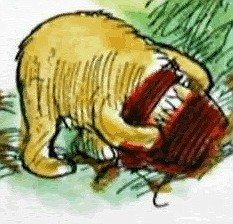 predicaments often called on the assistance of others. I would look at a scrape, a peccadillo, a run of bad luck – as just that – bad luck, as if I were not to blame for any of it. Humming off down the road, I was oblivious to the efforts of others that had gotten me unstuck.

In later stories Pooh, with the help of Christopher Robin, uses a ruse of a storm cloud and balloons to get up into a tree to steal honey from the bees. Getting stung was no deterrent. In another story he gets his head stuck in a honey jar; he couldn’t just leave that precious honey alone in a trap he had made… he had to test and taste it. All up. And on and on – my memory of Pooh is his attachment to honey. It has been in recovery that I have looked at this attachment and his imperviousness to consequences in another way. Amusement had given way to concern.

I would buy booze for a party and drink it all up before the guests came- needing to buy more. I bought drugs on behalf of my friends, used them up and had to scrape up money to replace it. I would steal drugs from my boyfriend, from my room mates, drink their liquor and steal their cash if it was laying about. There was no line between what you had and what I needed. The consequences of disappointment, anger, or betrayal were never bad enough to make me stop – until my final run was over.

I never did see Winnie the Pooh manage his consumption nor did I see Christopher Robin cease his codependent behavior. Like many socially acceptable over indulgences, the honey addiction was seen as amusing and tame. As a cautionary tale it is mild.

I will tell you how I got to reading the stories in a different light. Number one I love them! They are an affectionate part of my youth. I also try to be a Christopher Robin to myself in current time: saying “silly old bear”, when I face something scary or need a little encouragement from having made a small mistake.

The problem comes if I make the same mistake over and over again; if I begin to use up someone else’s honey (time, love, attention, resources of any kind) without learning from it. If I am constantly late or forget to bring cash and someone has to pay my way, if I am thoughtless – costing someone else time or effort. I can do these from time to time, but if it is constant I am relapsing. I began to see Winnie the Pooh’s bumbling as less amusing if I put another behavior in the place of “honey”.

The lesson I take away from this is notice: notice the habits, notice the patterns. Then give myself a kind word as I learn; but be firm when I create unhealthy patterns. I wonder what other secret messages there are in the books of my youth?