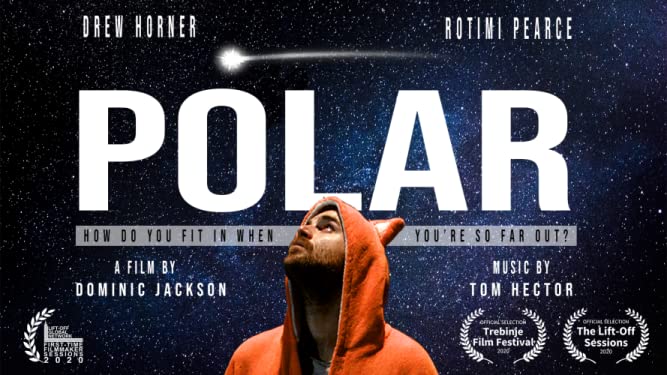 Polar: How do you fit in when you are so far out? Saturday Night At The Movies

One of the true blessings of producing the REEL Recovery Film Festival is being introduced to Indie and experimental films that would normally fly under the radar. By partnering with In The Rooms films like Polar, this month’s Saturday night movie, have access to a whole new audience.  And that audience gets to see an honest and timely film about the wages of alcoholism and apathy.

who acted as writer, director, producer, DP and editor on the film made Polar, from the UK, on a micro-budget.  Despite spending only £100 (139USD), Jackson pulls together cast and story to make a film that rivals those made with many more zero’s after the 1. Drew Horner plays the lead role of Robin, his portrayal of an alcoholic is raw, fearless and engaging.  The viewer has a stake in Robin’s well-being, we are rooting for him to succeed.

You see Robin has been a recluse for the past few years. Between mental health issues and a dependency on drugs and alcohol, he has fallen out of touch with his friends, family and life.  Reaching out to his successful friend, Steve, Robin begins an odyssey of Self-improvement. It’s strewn with blackouts, embarrassing encounters with women and missed job opportunities.  He’s a good-natured screw up who can’t seem to stop screwing up.

Polar was shot in two months documentary-style with minimal cast, shooting in easy access locations with no permits for a “fly on the wall” style. There is a voyeuristic aspect to the film. Like peeking into someone’s real life with an authenticity many films lack but that is so refreshing.  For those film buffs out there Polar was shot in the dogme 95 style.  Started in 1995 by Danish director Lars Von Trier, filmmaking must be done following certain rules.  Shooting done on location, no sets or props can be brought in; the camera must be hand held; the film must take place in the here and now, etc.  The goal is for the director to focus on the story and the actor’s performance.  This method brings the audience into the film and connects them to the story on a deep level.

Polar was shown at the 2020 Virtual REEL Recovery Film Festival and can be seen on Saturday, April 10th at 9pm Eastern and 6pm Pacific.