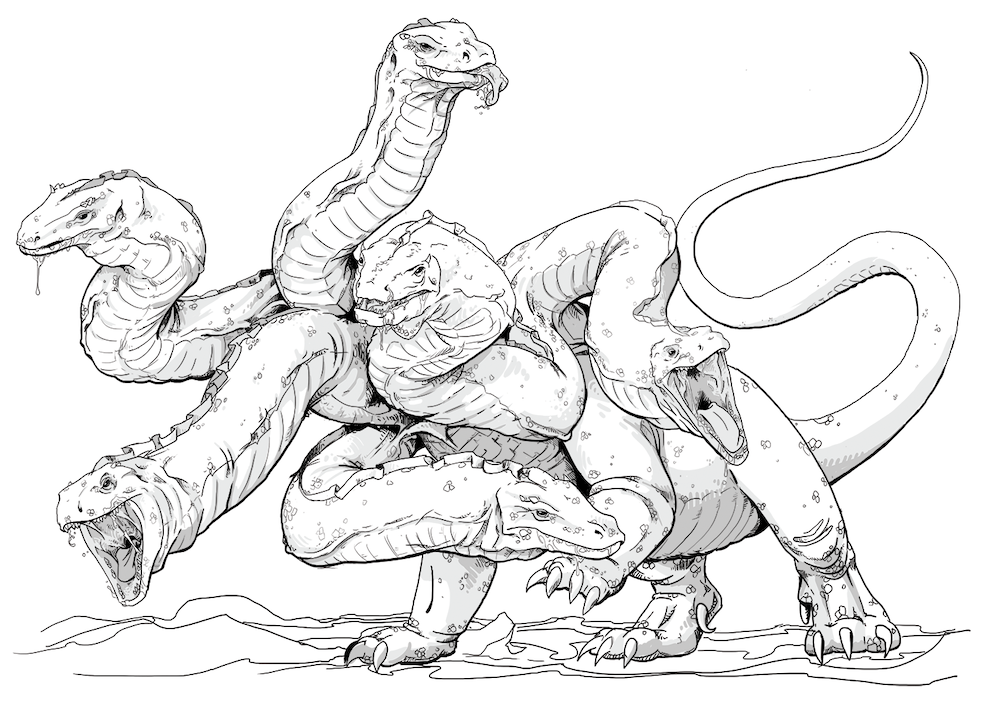 Ever wondered why there’s more to Twelve Step Recovery than mere release from the substance we think is killing us quickest?

Today, I’m a happy, sober member of Addictive Eaters Anonymous. But for 13 long years, I struggled in Alcoholics Anonymous meetings—grateful not to be drinking, but not experiencing the freedoms promised in the Big Book.

That’s no reflection on AA. It was entirely my own fault: I never completed Step One—too proud and stubborn to seek help or admit the seriousness of my problem with food. Sure, I’d come to believe in a power greater than me, (how could I not, when the desire to drink and drug had been removed?) but the channel to God was blocked by enormous volumes of food, and the delusion that I could control my eating. My case isn’t different. Other Addictive Eaters Anonymous members said they also had problems with substances other than food.

My addiction swapped from substance to substance like the many-headed monster of Greek mythology, Hydra.

It really was like trying to overcome a monster. Just when one substance was “down’’ (thanks to God’s grace), another would pop up again.

That’s why AEA’s primary purpose is vital to me. I must be free of addictive eating and all other mind-altering substances and behaviours to have a happy, purposeful life. In my case, food didn’t rear its head once my higher power removed my desire to guzzle booze. Where I once believed I was born an alcoholic, I now believe I was born an addict and food was my first, and longest-lived, obsession. Since boyhood, I was riven with fear, anxiety and a form of depression that plagues the overly self-absorbed. Terminal navel-gazing, in other words.

Food took the edge off of how I felt long before I could access alcohol.

I felt great guilt and shame for eating burned, soiled and spoiled food, but that wasn’t enough to stop me from doing it. The disease also led me to lie, cheat and steal.

My first exposure to Twelve Step recovery came almost thirty-five years ago, at a meeting of people now part of Addictive Eaters Anonymous. I’d recently returned to my hometown after four jobs in four cities in one year—a Not-So-Magical Mystery Tour addicts call taking a geographic “cure.” My marriage was rocky. I was in constant conflict at work. My mind was a mess.

One day, I spotted a newspaper advertisement for a food fellowship. Kidding myself, and others, by saying I was investigating for ‘professional reasons,’ I went to a meeting. At that meeting, I heard, for the first time, how people had found a solution for addictive eating.

Later, two members visited me, and, after listening to my piteous spiel, strongly suggested that if I wanted to get well, I’d have to surrender all the substances I’d been using as a solution, and adopt the Twelve Steps as a way of life.

Two years on, in yet another city, I came to my first meeting of Alcoholics Anonymous, beaten by the booze and fearful I was about to die.

I never admitted in AA that I had a problem with food.

My AA sponsor soon convinced me to give up my crazy plan of replacing alcohol with dope and pills. But I never admitted in AA that I had a problem with food (although it certainly showed on my bones).

The message I heard from those early AEA members ruined any enjoyment I got from eating. Furthermore, in AA, I saw people who were also working the AEA programme get better before my very eyes.

I was essentially sponsoring myself for eight years in AA, so real change was negligible. But deep down, I knew I would have to be around recovering addictive eaters to have any hope of living free from the obsession with food.

When it got bad enough, I sought help from a member of Addictive Eaters Anonymous.

When it got bad enough, I went back to meetings and sought out someone who’d visited me some 17 years before. She told me I had “half-baked sobriety,” and if I wanted to get truly well, I had to surrender the food, and hurl myself into working the Twelve Steps.
Pride can be a stumbling block for people coming to AEA after a long time in another fellowship. I had to pocket my ego. Fortunately, God gifted me a ‘beginner’s mind’. I was able to start from Step One and willing to follow my patient sponsor’s suggestions. I began to experience the gift of surrender.

Since then, I haven’t had to eat addictively. I’ve cleared up the carnage of my past through working the Twelve Steps.

Many of those Big Book Promises I craved in AA have come true.

Last month, my boss rang to congratulate me on a quarter-century with the company. Imagine that—25 years in the same job in the same city after over a decade of aimless, desperate wandering and searching.

In AEA, we say sobriety is a gift that we must give away to keep. These days, I like to share my experience, and AEA’s solution, with members of other Twelve Step fellowships who discover a need for AEA.